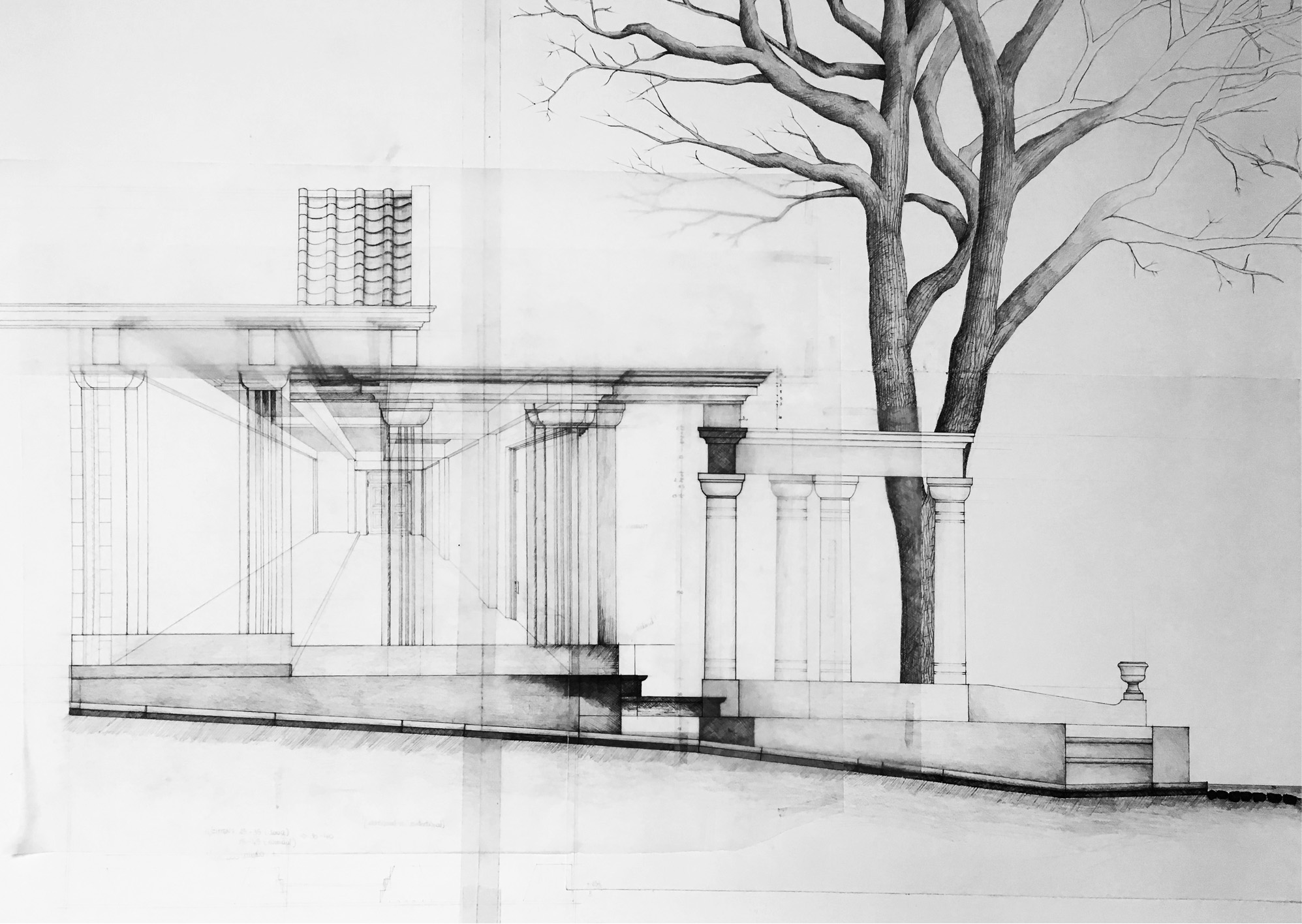 My fascination for the sharp edges of Classical architecture inspired me to explore it. Initially making different versions of the exisiting elements, I gradually came to desire my own architectural language while still keeping the sharpness as the architectural expression. Trying to create a place to be using the stylobate, the column and the cornice as the building principle, led me to discover the possibilities of the inbetween space. This inbetween space became part of what I call the spatial gradient: the layers of spaces from interior to exterior and vice versa. It is another aspect of defining space which gives layeredness to the architectural experience.

The slight topography of the Dieweg Cemetery had a strong influence on the spatial composition in my design. The importance of being able to relate to architectural elements inspired me to break the stylobate into parts. It translates the topography of the environment into the architecture. As I walk through it, I would be able to experience it each time I have to take a step to a different level on the stylobate. My body follows the path with the lowest threshold while my sight induces curiosity to somewhere else. The exploration in this place will require you to be at your own pace. I believe this is how I would feel more connected and present to the locus. The elements of nature such as water and fire were given a dedicated room. A fountain and a fireplace triggered me to push their presence in the architecture and environment. Such as the rain going down the gooves of the column of Water Temple, the smoke blowing away from the chimney of Fire temple. But I also wanted them to be present in the materials: the industrial steel and concrete and the natural stone. Each material had their own specific surface finish which tells us something about the process of making them.

Locus Esse means a place for contemplation and feeling present with the environment and ourselves. The overall spatial composition and the construction details are my ways of revealing the poetry for a place to be. 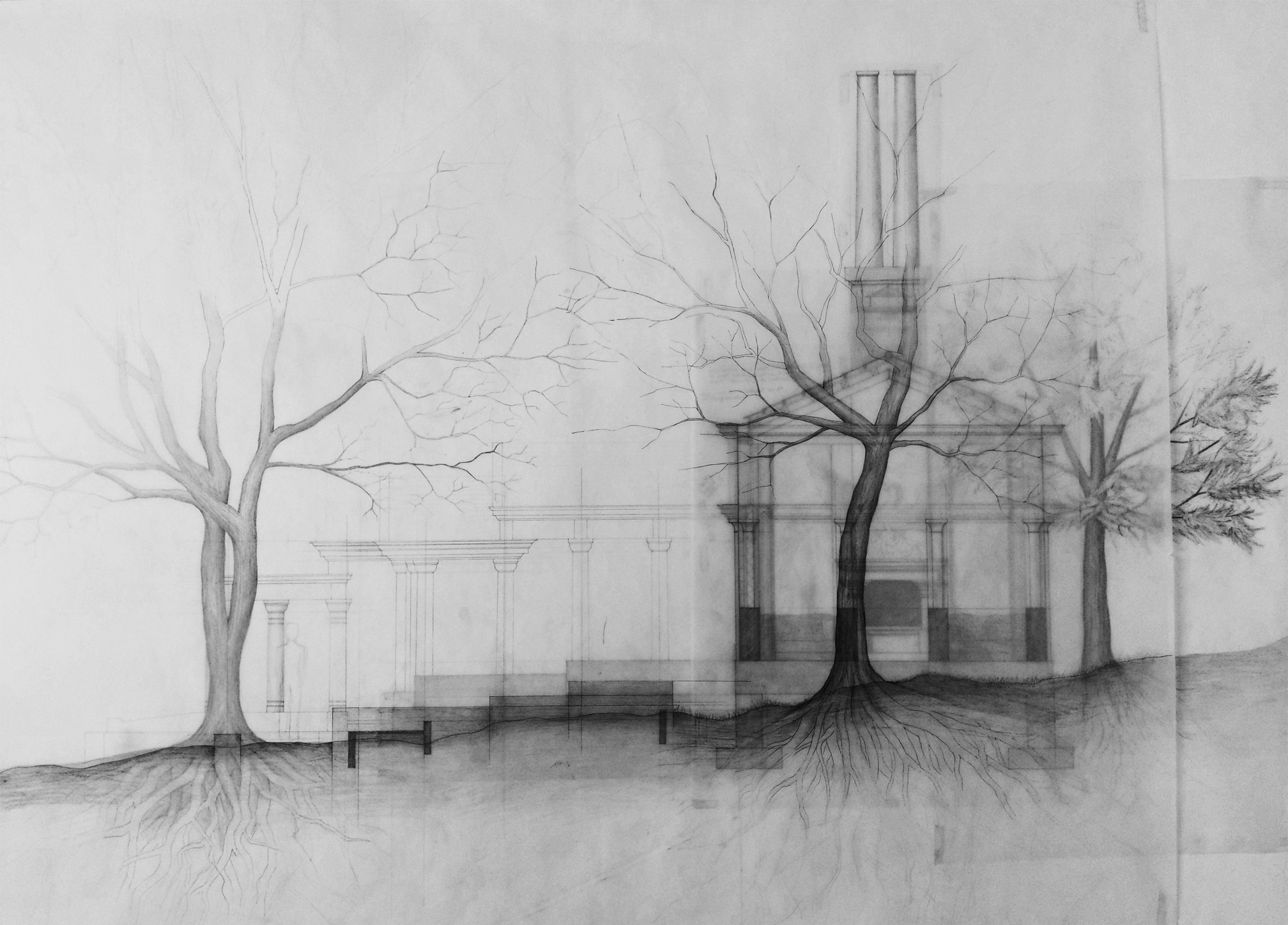 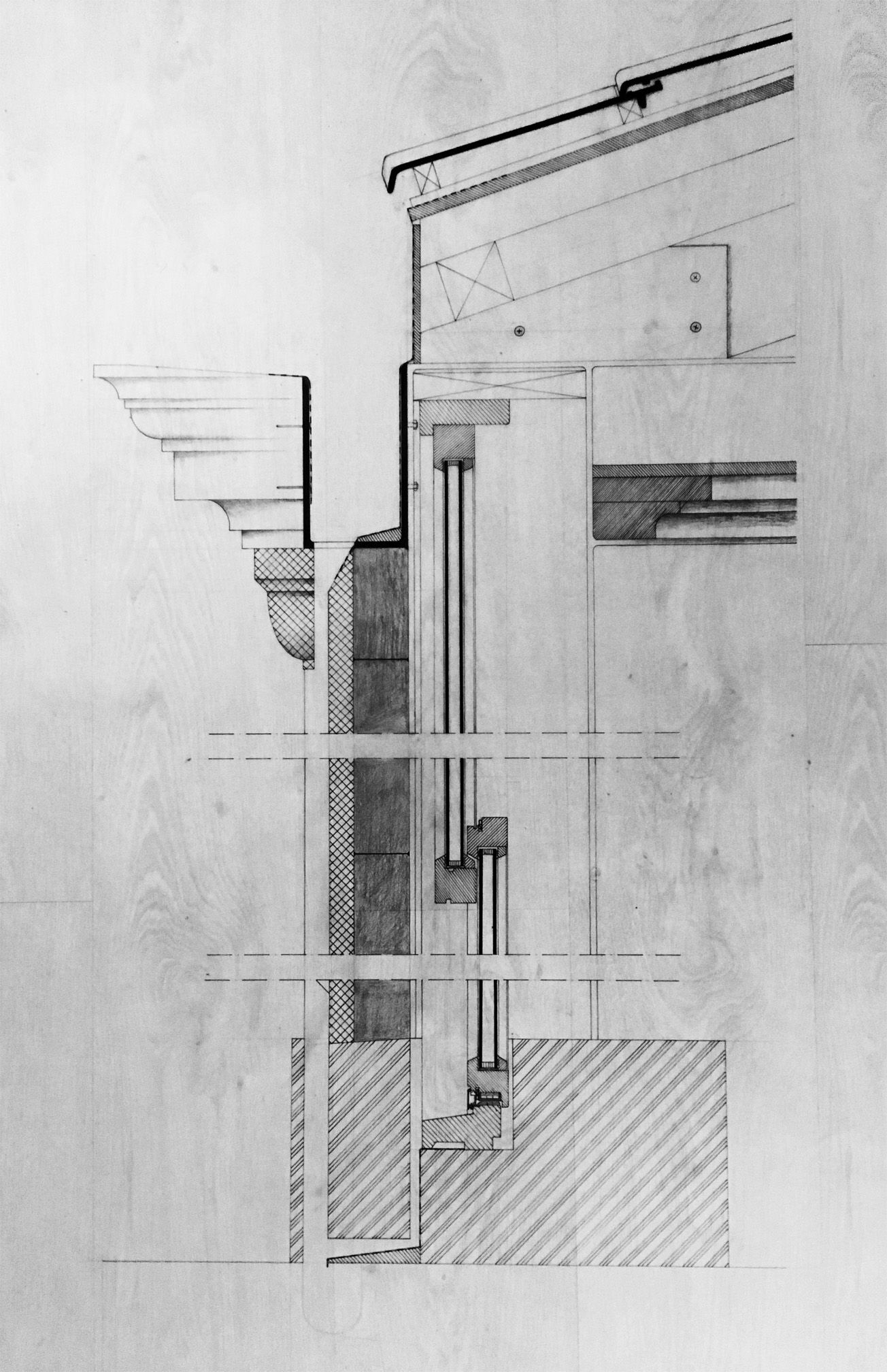 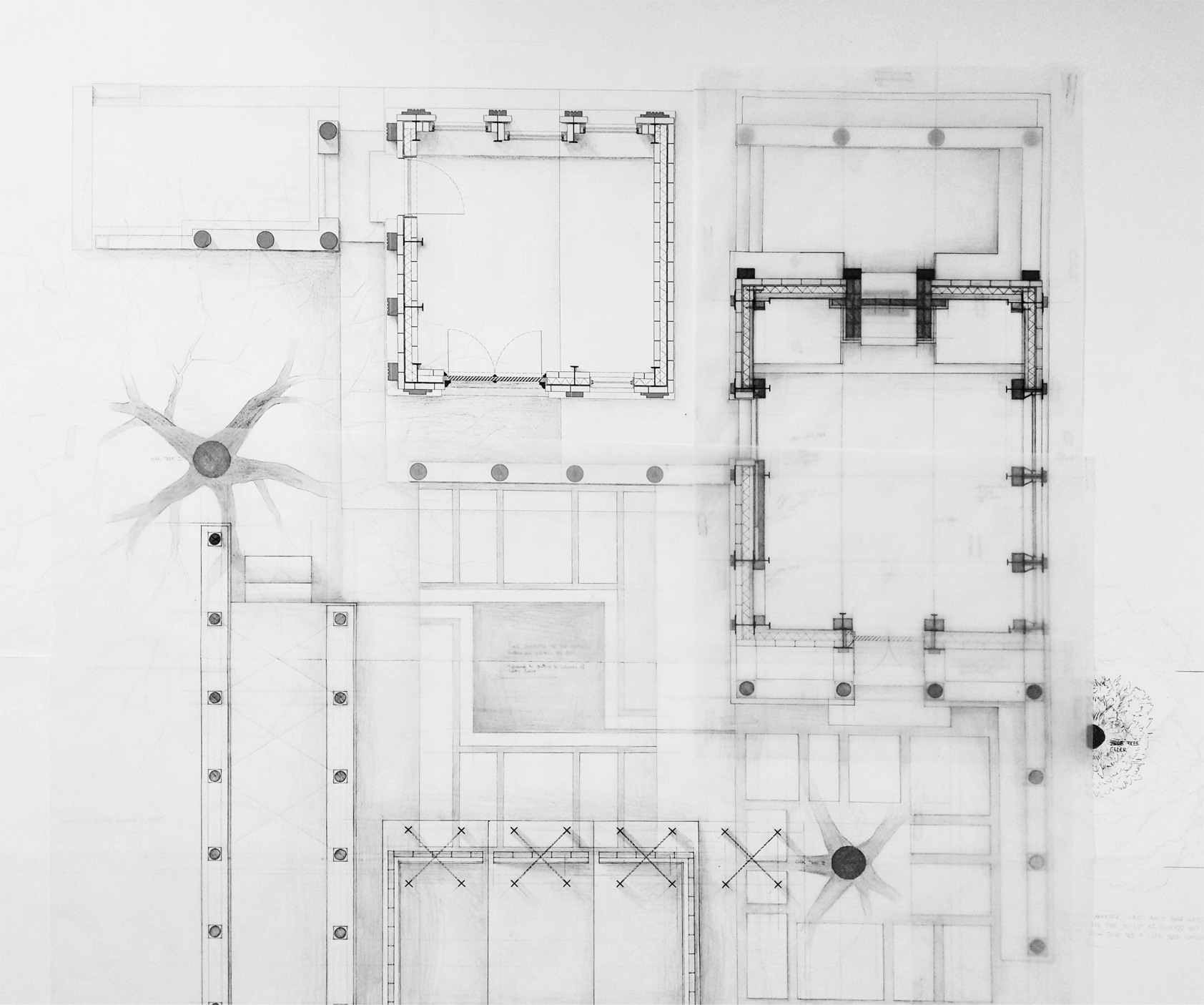 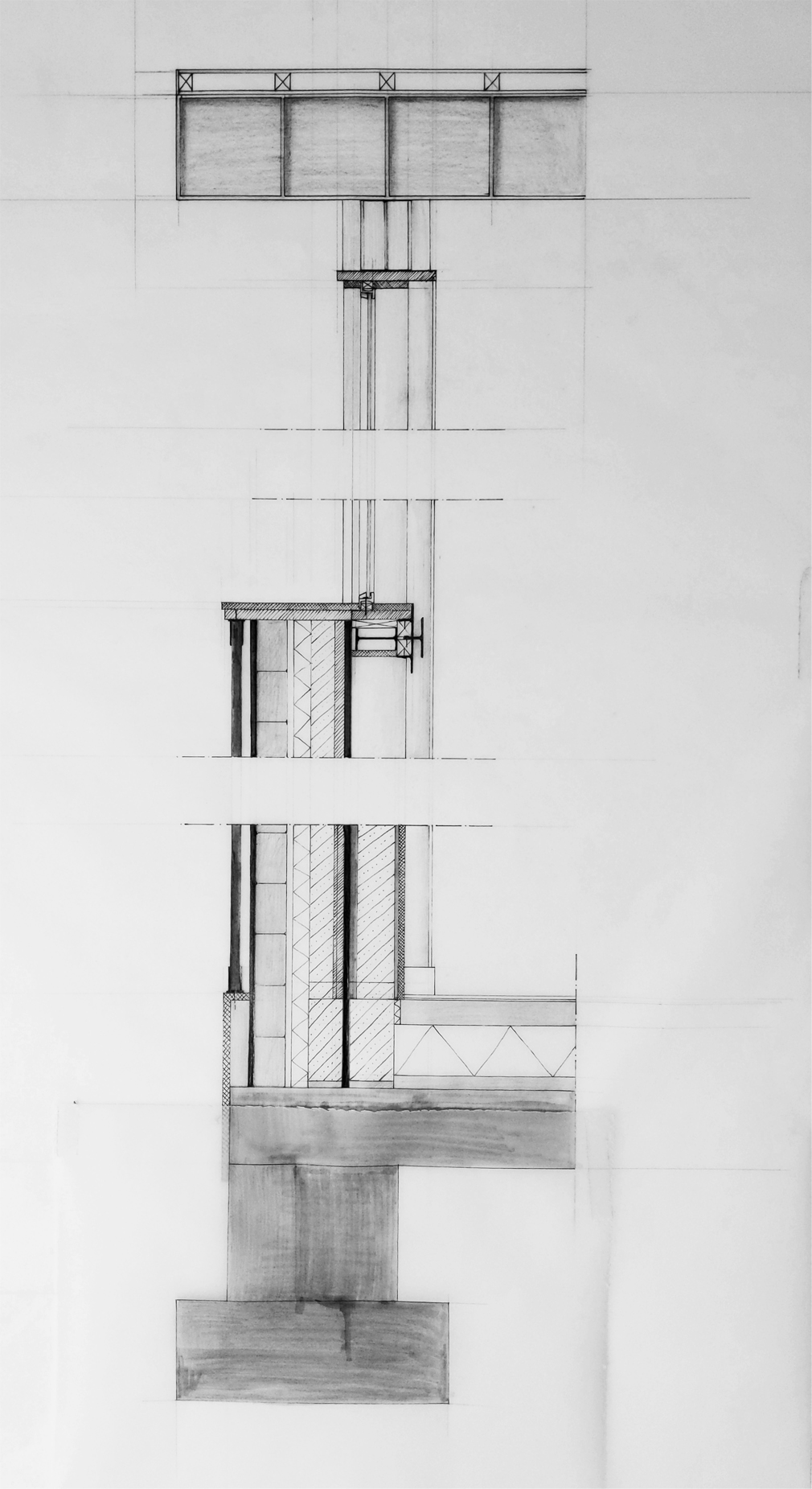 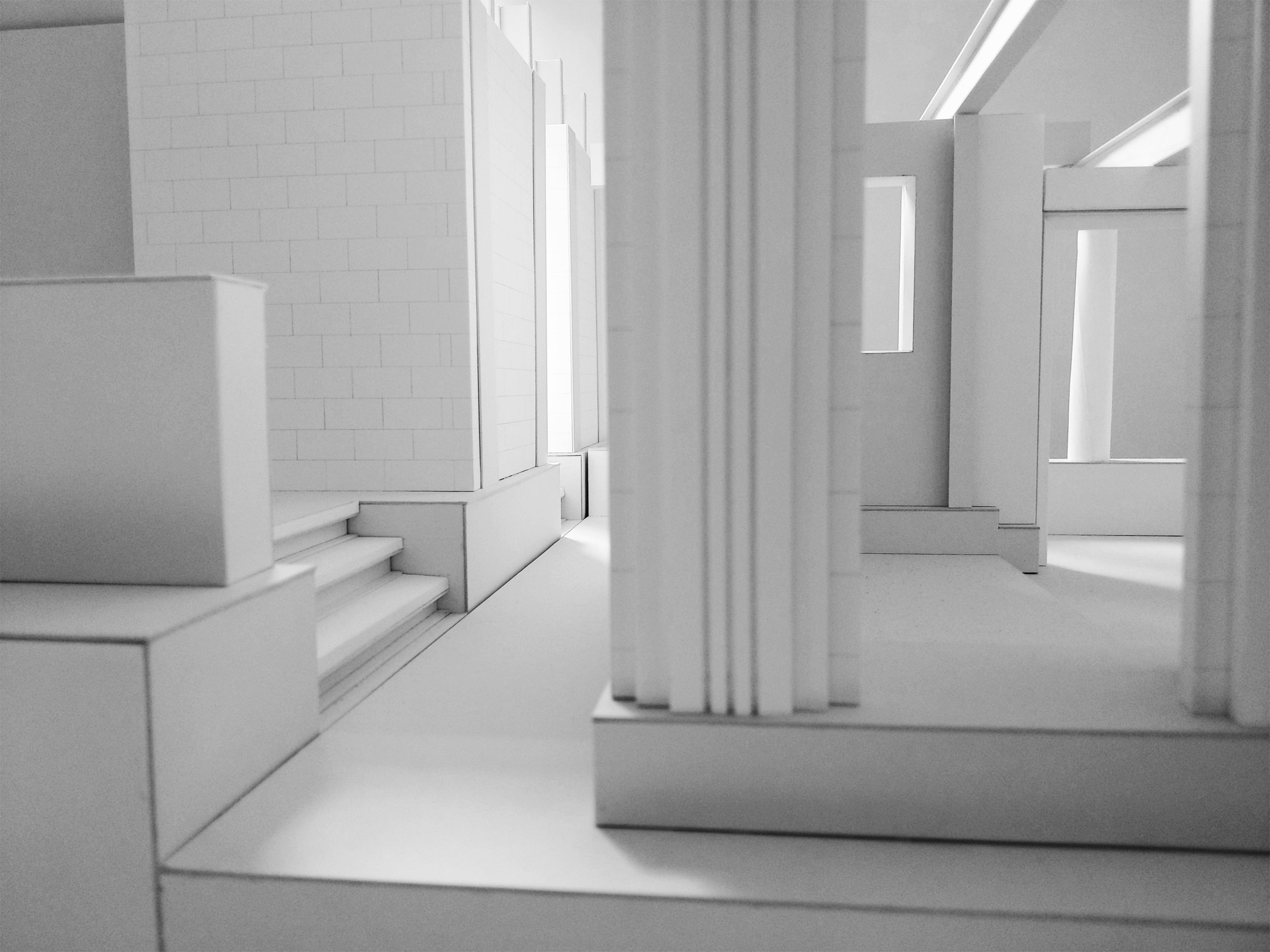 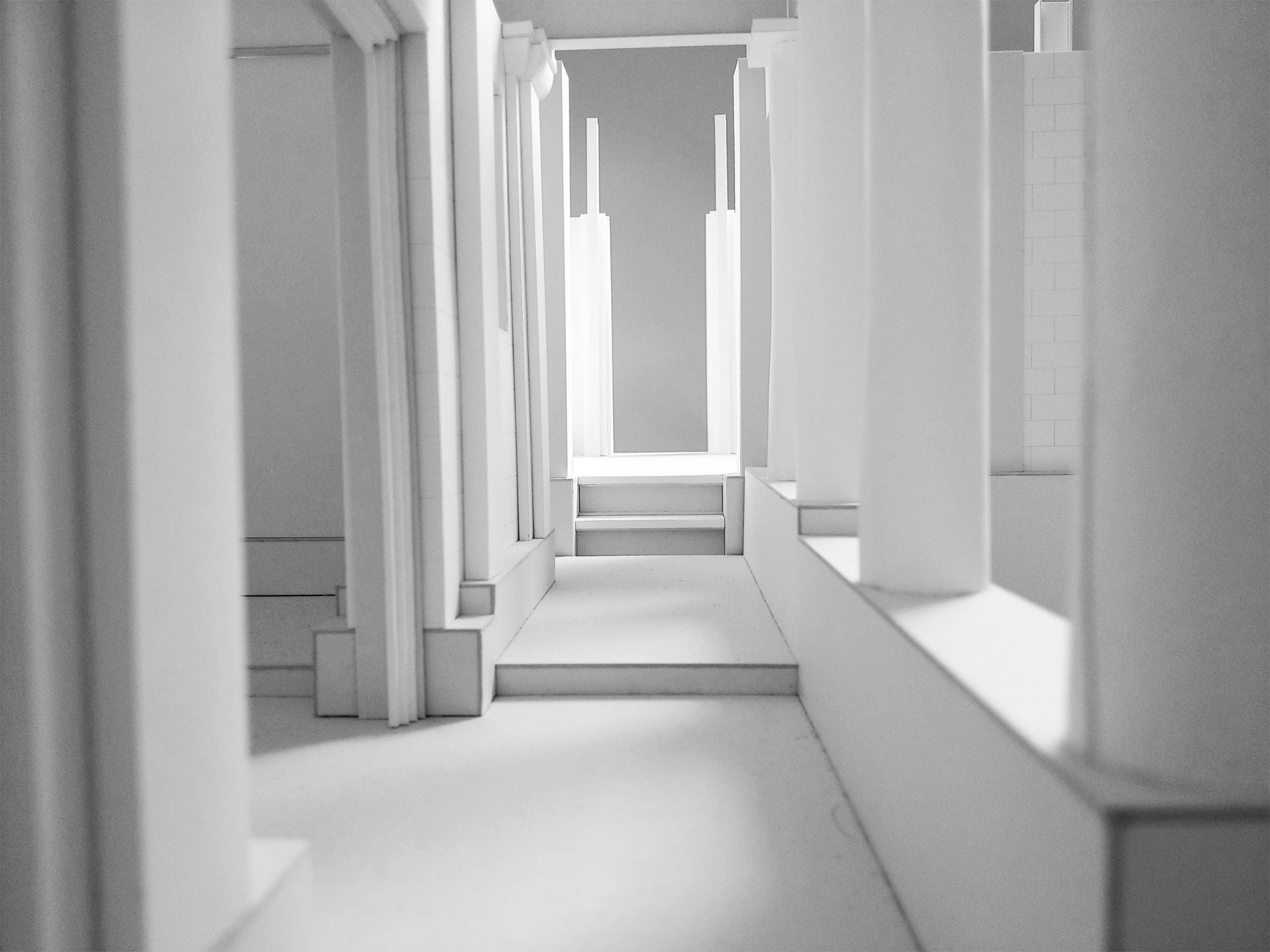 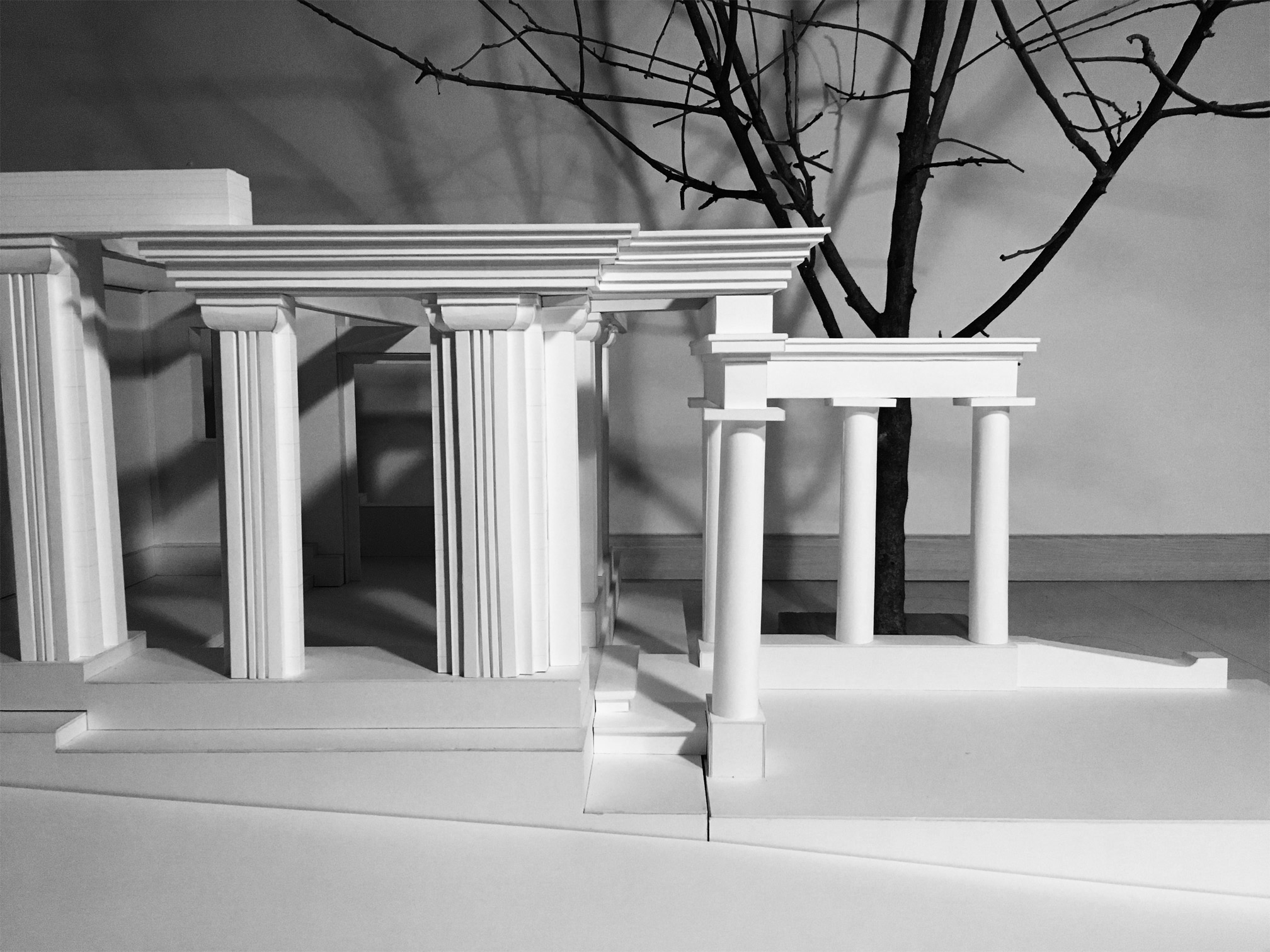 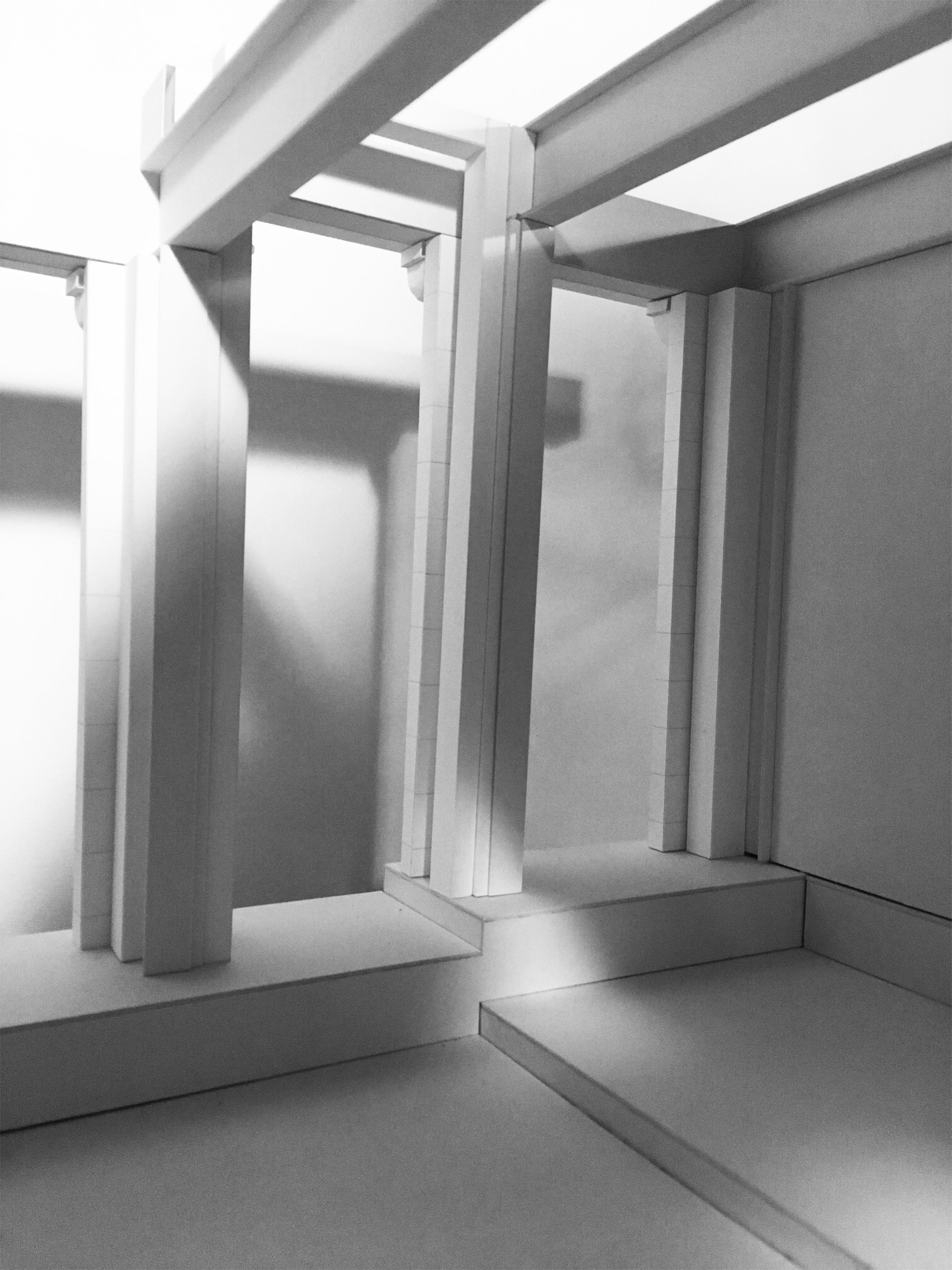 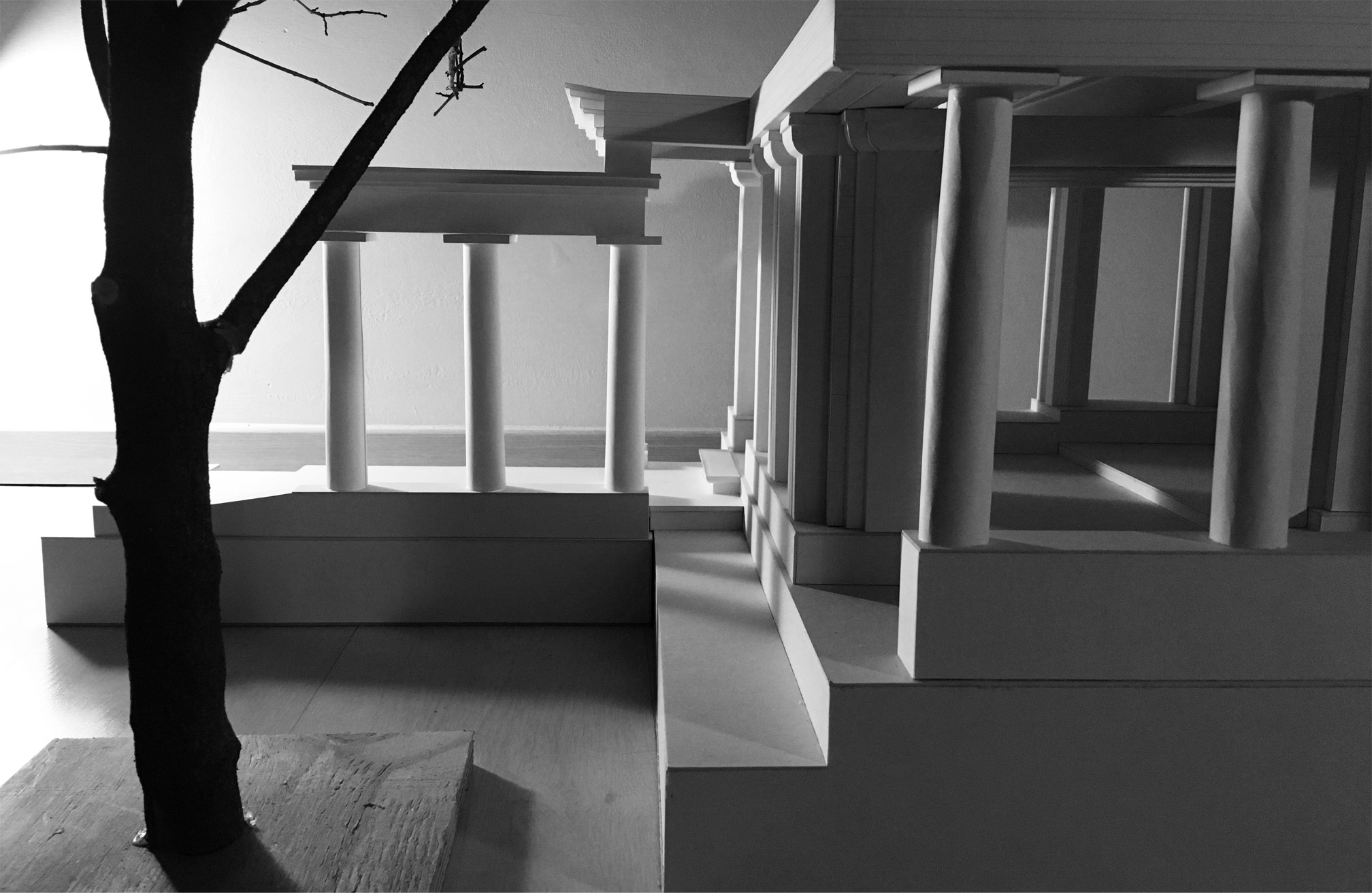 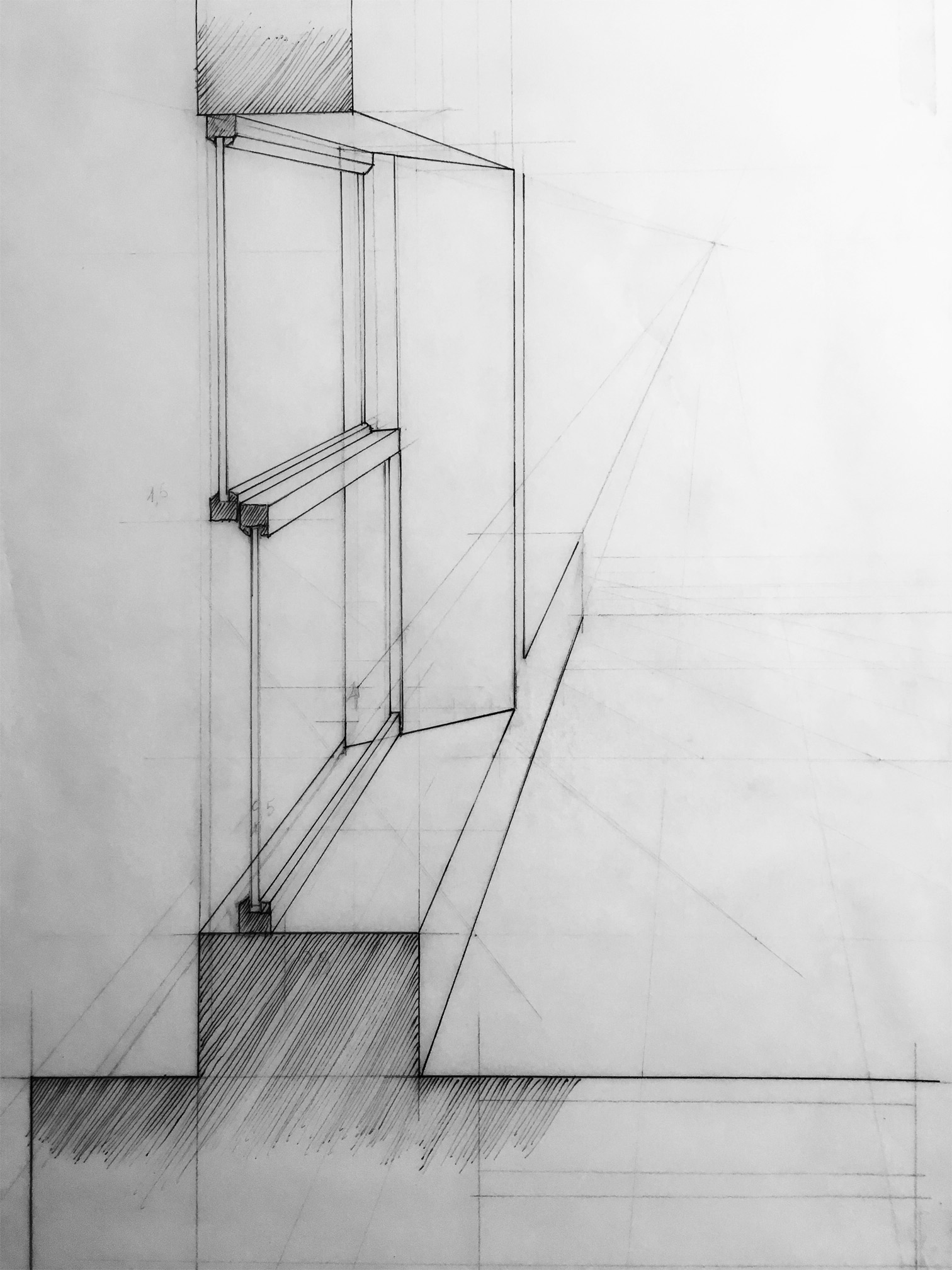 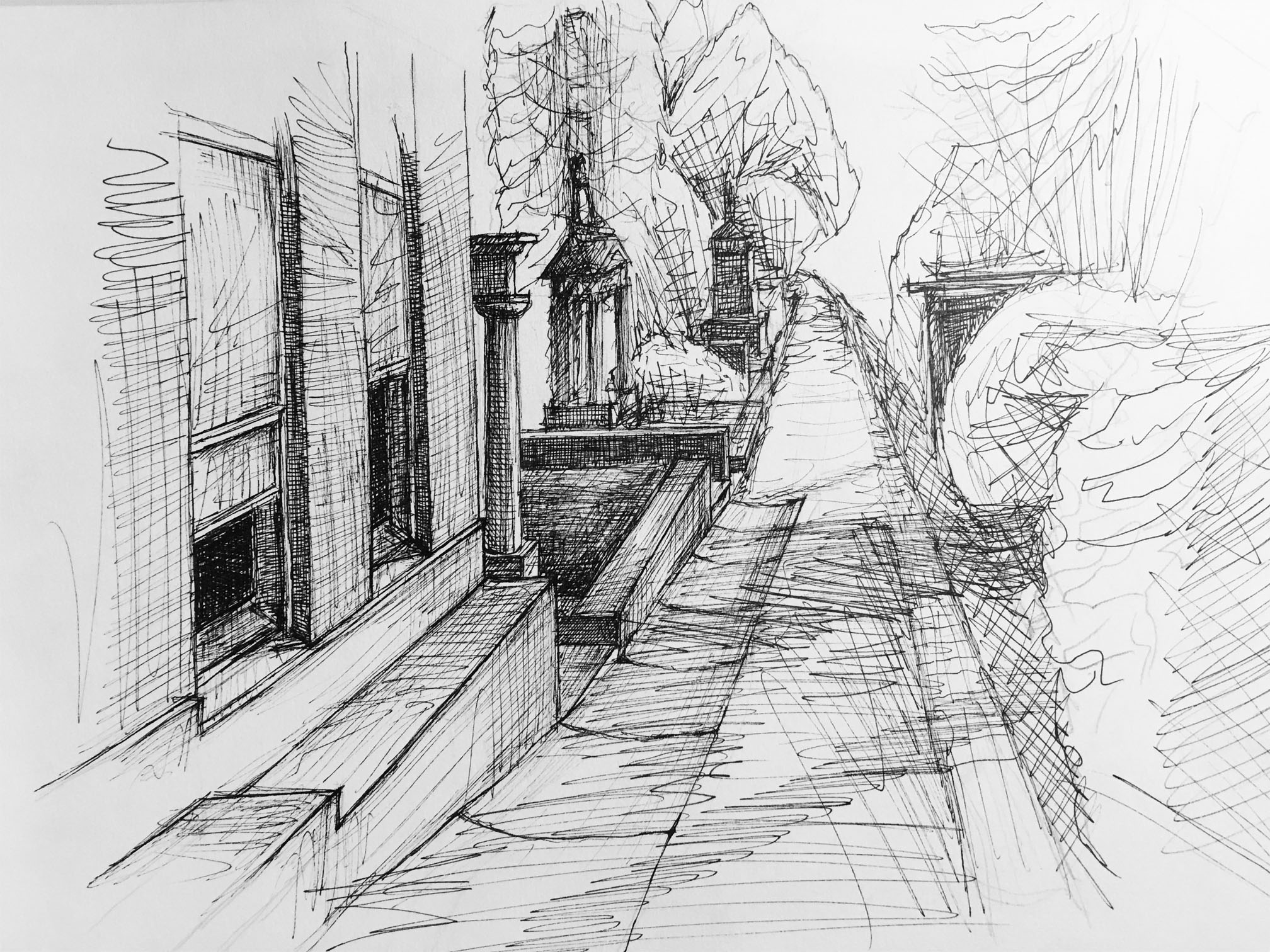 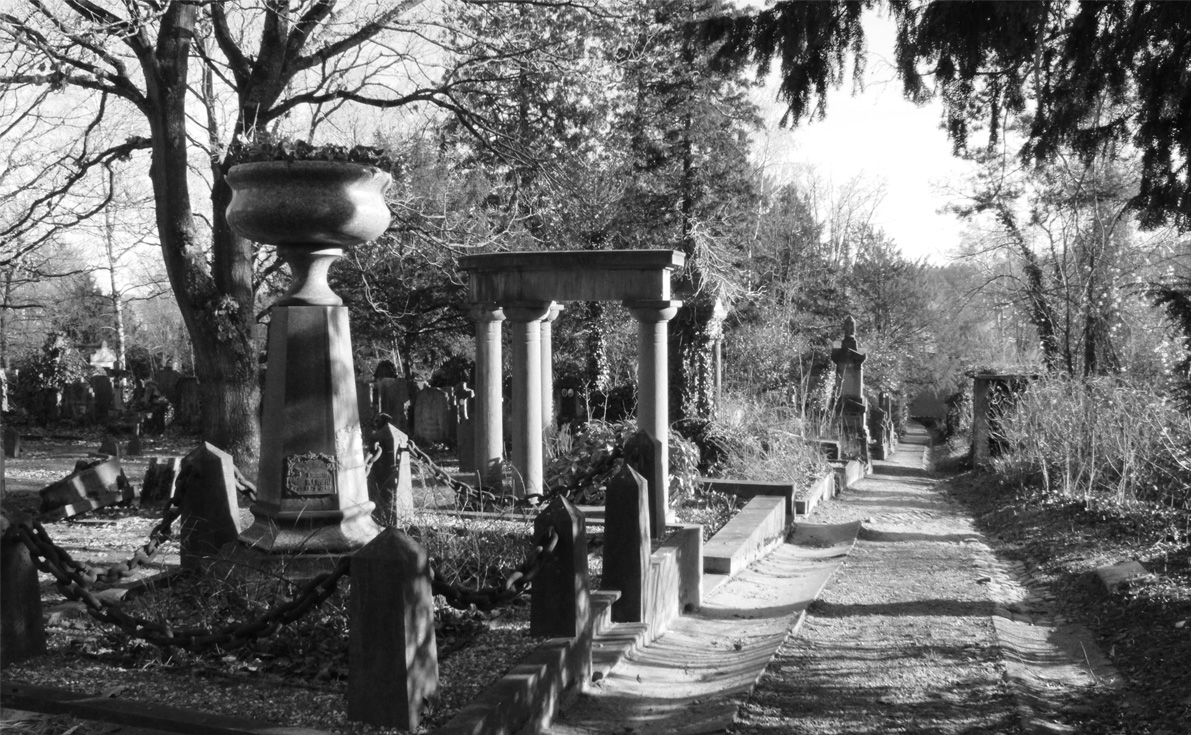 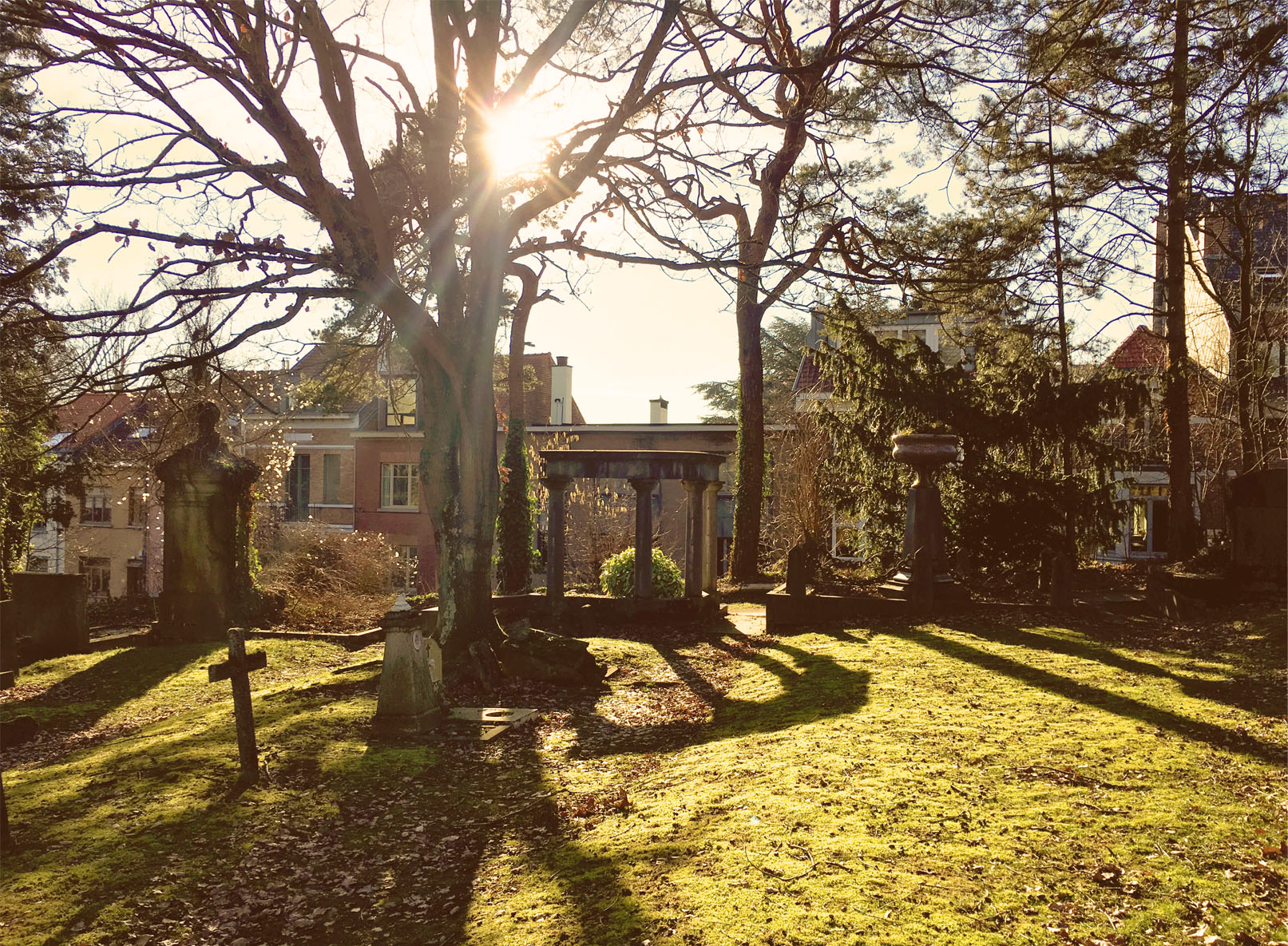 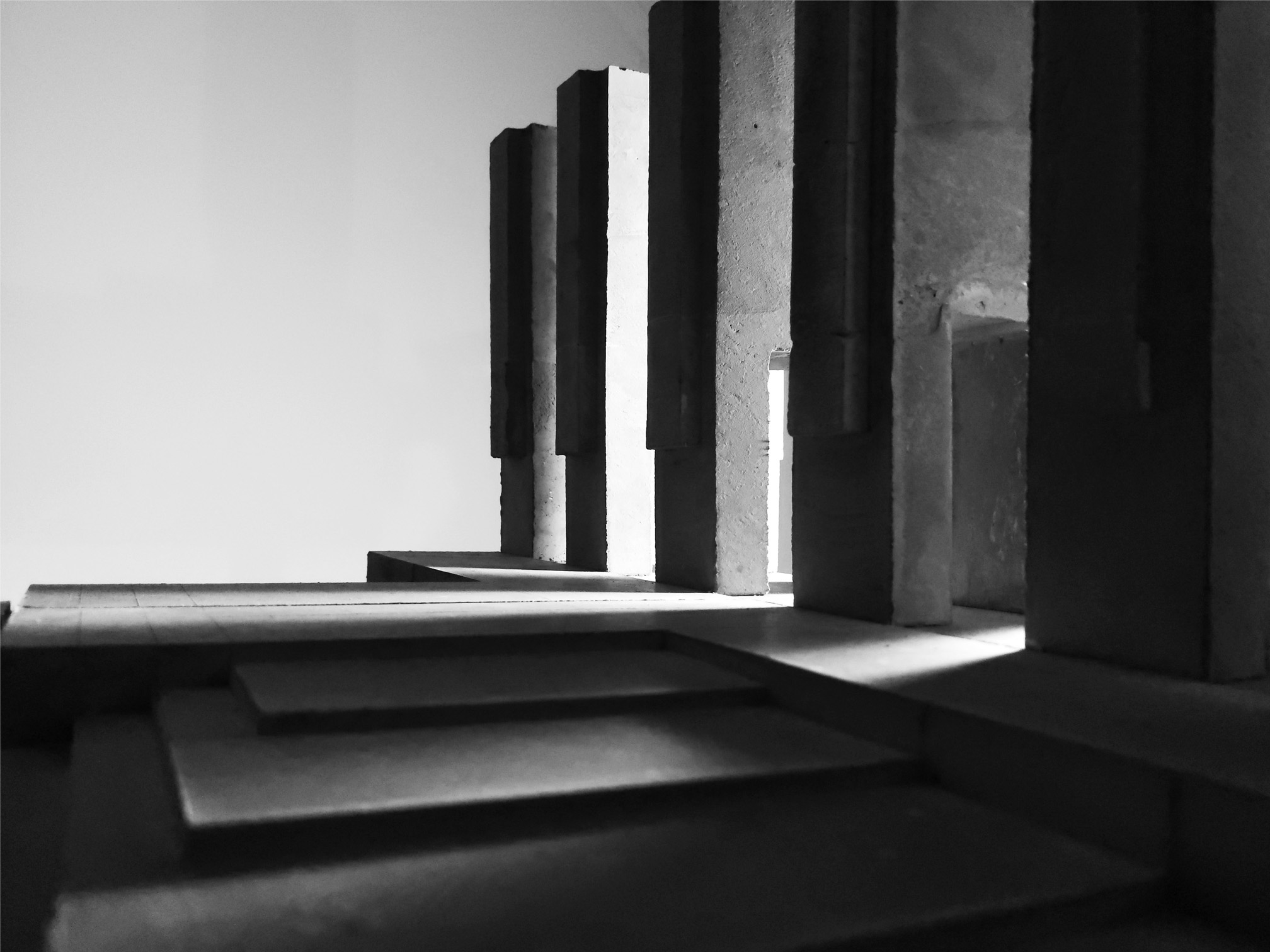 Heaviness, mass, roughness , decay, darkness, mysteriousness, ambience, heavy atmosphere, monumental impression, industrial, structural complexities, human traces, ... These were the things that I feel drawn to. I decided to work with stone as it enveloppes these proporties or give potential to explore towards the atmosphere that fascinates me.

Stone, known for its heavy mass, strong presence, rough look (if left unpolished), yet sensitive textures, is one of the materials that we know how to carve and built from since the beginning of human existence. I believe it is the art of carving that shapes our environment.

We surround ourselves with mass (of stone for example), maybe with pieces we have carved out from somewhere, or we dug out the mass we don't want and keep the parts that are necessary, or we invent materials that almost immitate the massivity of stone (e.g. concrete).

Aside from it being a strong and heavy material, stone brings along another quality which is the result of its massivity: darkness. I would like to explore the duality between stone and darkness, whereas I treat darkness also as a mass. As I carve into the mass of stone, I see how darkness can also be penetrated with rays of light through the small openings which are made in the stone facades and roofs. The exploration of the possibilities in how I could introduce light in a massive construction, heavy in materiality and atmosphere, is an exciting thought. I see the earlier discussed properties of the images and references that I felt drawn to come together and unfold in this study of mass of stone and darkness. 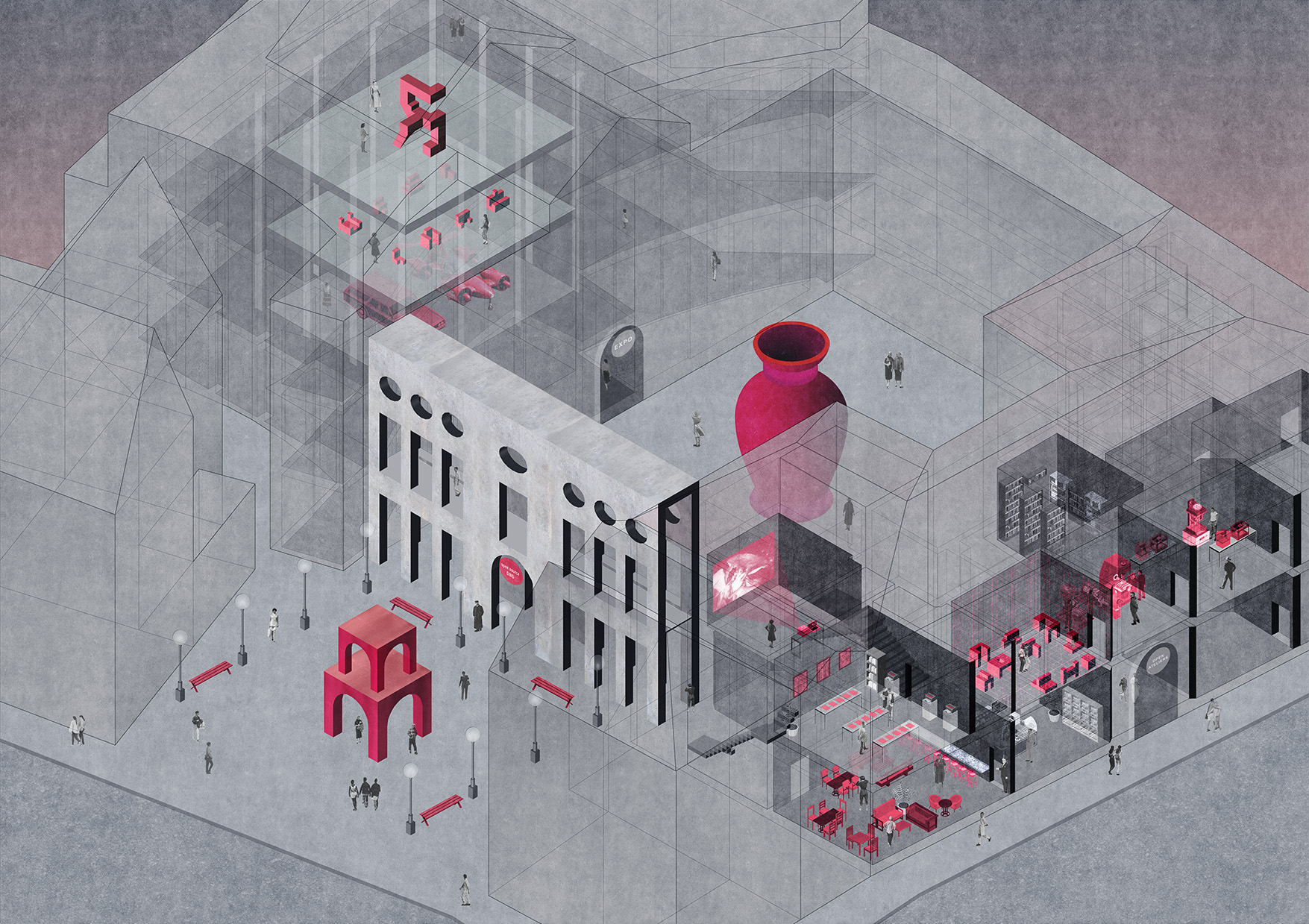 Online platforms have become more popular and a success in the last decade as they keep growing much more. I took an interest in this phenomenon as the Design Museum Gent has the ambition to become the Museum of the future.

What occurred to me from looking at the most popular online platforms is that visitors "look" at content made by creators and that online platforms provide surfaces for interaction between these two parties. On the other hand exists the "overlooking" task of the platform itself to let things develop in a controlled environment and bring interesting topics into the spotlight.

The Design Museum Gent could learn from the strategy of online platforms to become a physical platform which allows for interaction between new designers/artists and users of design to interact with each other as a means to make design more accessible for everyone, while the museum itself still provides frequent curated expositions for more developped design/topics. 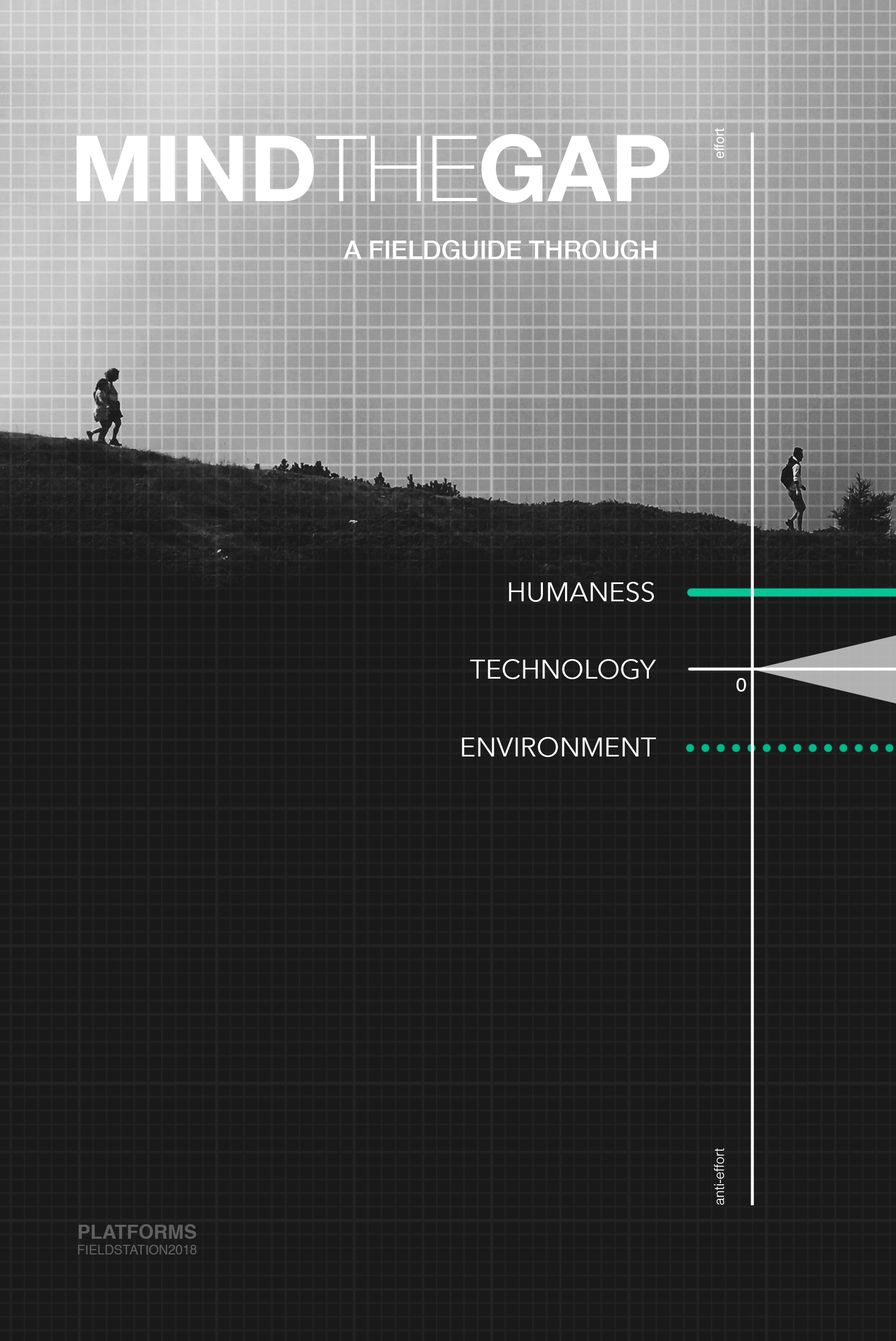 In our rapidly transforming society where technology has come to play a bigger role in our daily lives, we find three interesting entities that interact and relate to each other that leads to situations, phenomena,... worth discussing. We define the entities as:

humaness: the condition or quality of being human,
technology: advanced technology specifically developed or created to meet human needs,
& environment: changing surrounding due to human intervention.

With technology as the driving force in our society that grows at an unknown fast speed in the last decade, the two other entities fluctuate around it at its own paces. We tried to visualise this in a kind of a timeline, supported by a variety of examples where platforms directly or indirectly play a role, which illustrates situations where these three entities either go in sync with each other or take a distance from each other which we call gaps.

In sync situations appear when two or all three entities work together and evolve in harmony. When two or three entities evolve at a different speed, it will lead to a gap where they do not complement each other. With these diverse situations, questions are raised and discussions arise within this complex matter of the technological age.

By having defined the entities and mapped out examples in this timeline, certain plausible scenarios came to mind, as well as interesting strategies that we apply around technological development. 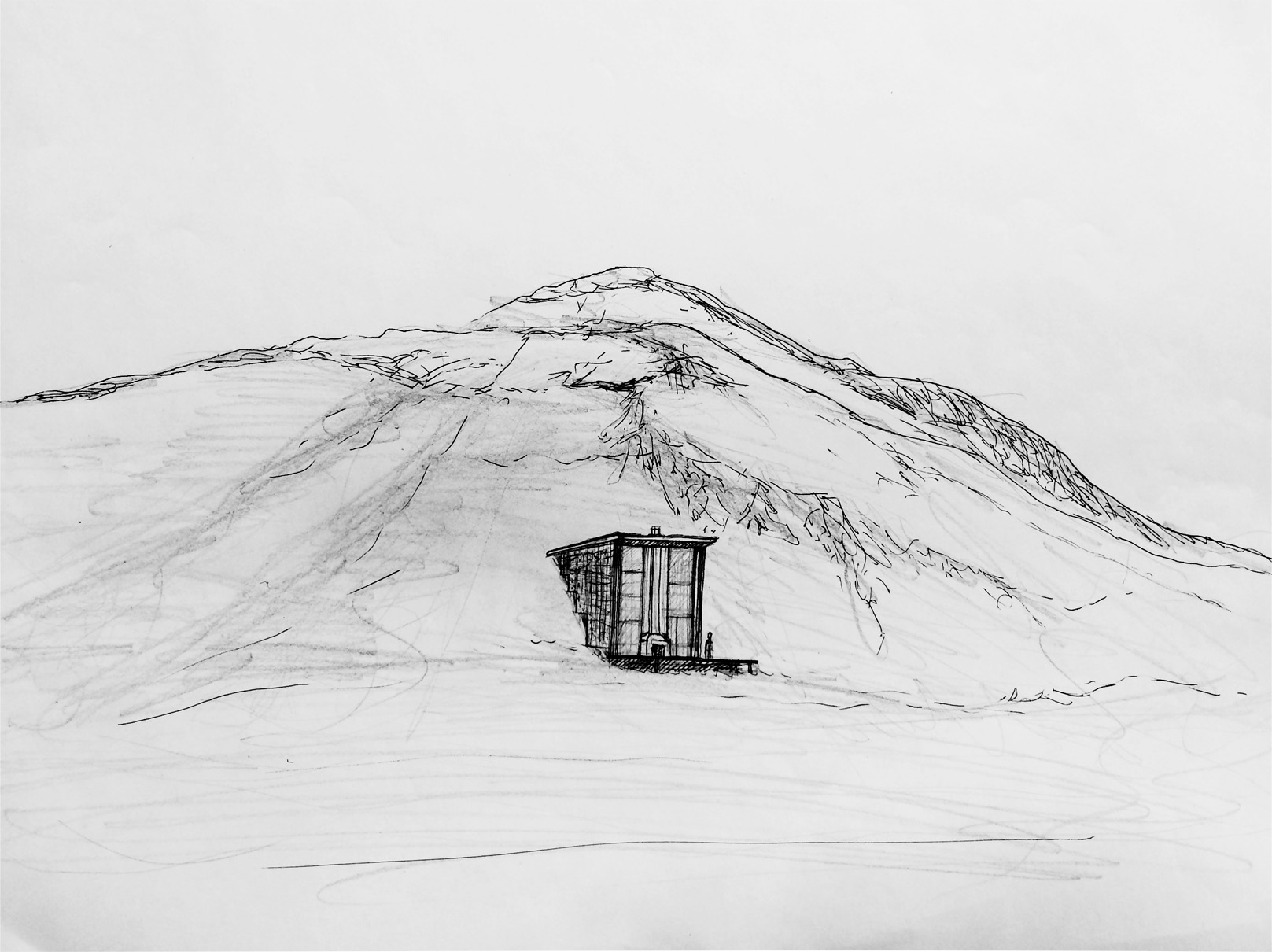 IMAGINE: After a long walk on the Scottish island Skye we come across a shelter. This is Loch-Inn.

Loch-Inn is a pavillion situated on a sloped site at the foot of a hill which goes into dialogue with its environment. The structural elements follow a ratio which translates the topography of the hill into spaces in the building. While the building shuts itself off from the rough landscape, the spaces of the pavillion become a completely different place from the nature outside, yet making the levels of the hill part of the architecture. The wooden interior and its fireplace offer a warm intimate space for comfort and shelter.

We enter the shelter in a high space and get the sight that layers of spaces get smaller each level that get higher and deeper.
The principle of the pavillion: the structure is made of columns and beams which have the same dimensions for each level. First we sought out a decent slope. Afterwards, the levels of the pavillion were defined.

The island Skye has a rough landscape and a cold climate with lots of hard winds and often rainfall. We wanted the pavillion to become a place of calmness where hikers could take a rest. Therefore we chose to keep the refuge sheer and simple. The facades on the left and right are completely cladded with wooden shingles which are double layered. A horizontal band of windows on top provide the minimum needed light to illuminate the interior.

The first level, also the ground level is extended outside as a big platform which is an exterior reception space of the building. On the front facade we find a fireplace. The wide chimney is made out of masonry which extends beyond the roof and which also serves as a structural element. It offers horizontal stability of the building. From the outside we can clearly see the building is divided in levels. Firewood are stored outisde beneath the building, beneath each level.

The structure of the pavillion consists of slats made from local cedar wood which are alternately jointed to each other, resulting in wall and floor elements. Columns are deduplicated, also made from the same slats. All horizontal slats have the same width while the height increases as the span becomes bigger. This creates a slope in the roof structure which drains the rainwater down to the back of the building.

The concept of the pavillion: the slope of the hill is translated into the interior spaces of the building by following a very specific principle. It creates levels within inside where each level is a space. The deeper we proceed into the pavillion, the higher we are on the hill, and the smaller and more intimate the space becomes. Each level can be closed off by a moving wall-floor element. The interior is in depth divided into four different heights, which we call "levels", each respresenting a space. Sideways it is divided into three bays, seperated by columns. Each level has one fixed vertical wall, one opening, and one wall which can be layed out as a floor element through a pulley system; thus each bay is different. This way, each space can be expanded. The moving elements can be operated manually. We have made cutouts in the core of the slats to make them as light as possible in order to make it easy to lift up and down. 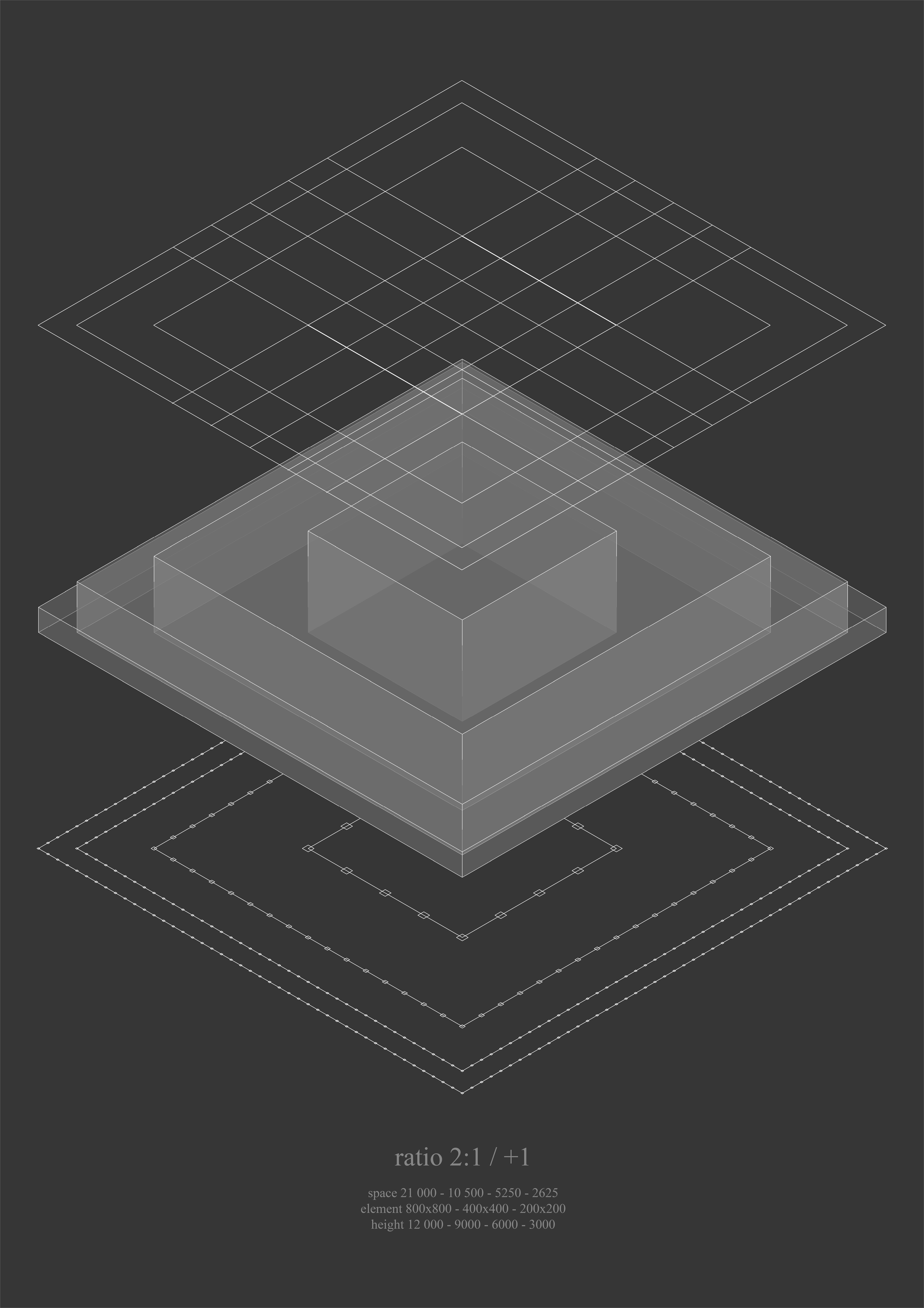 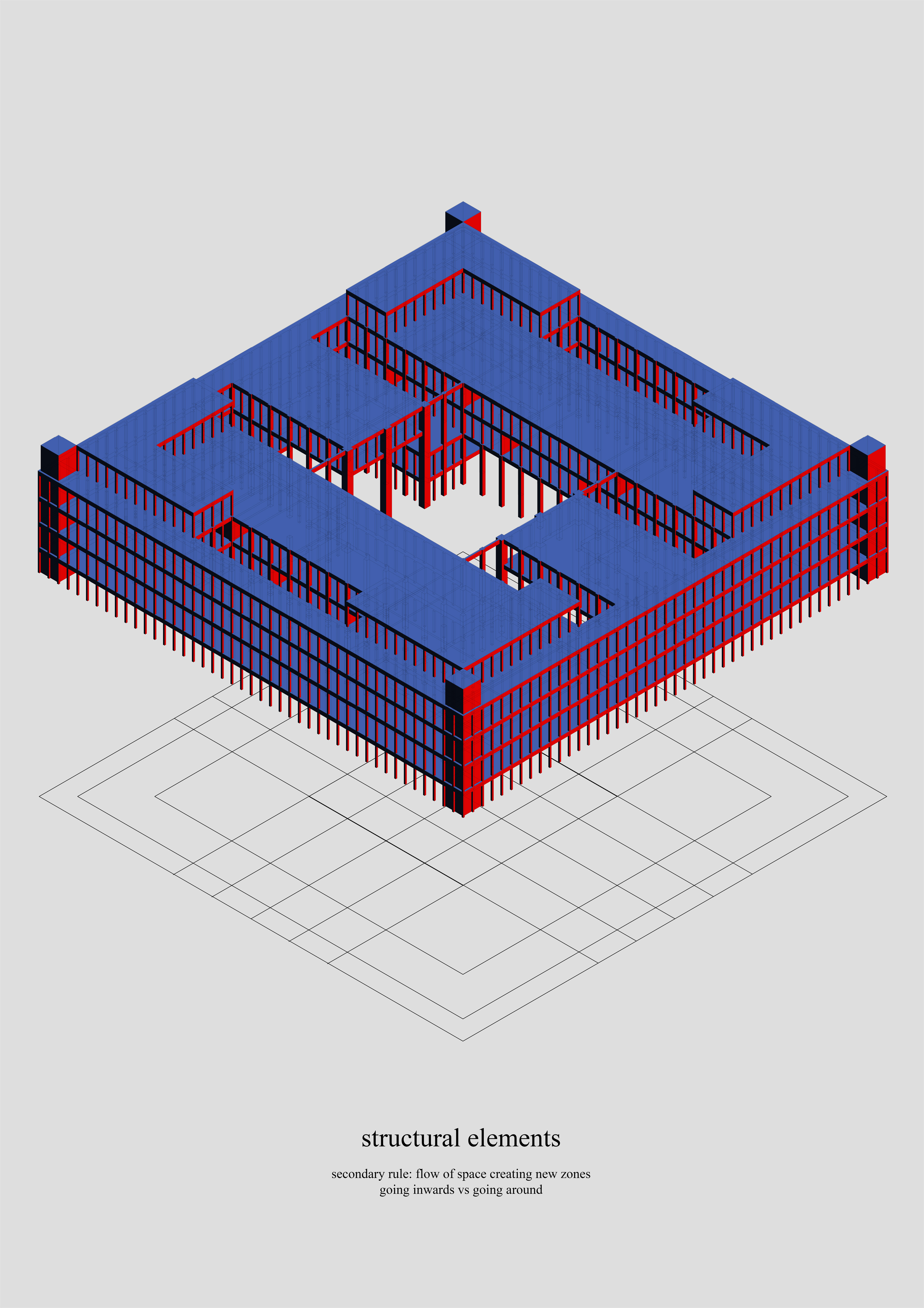 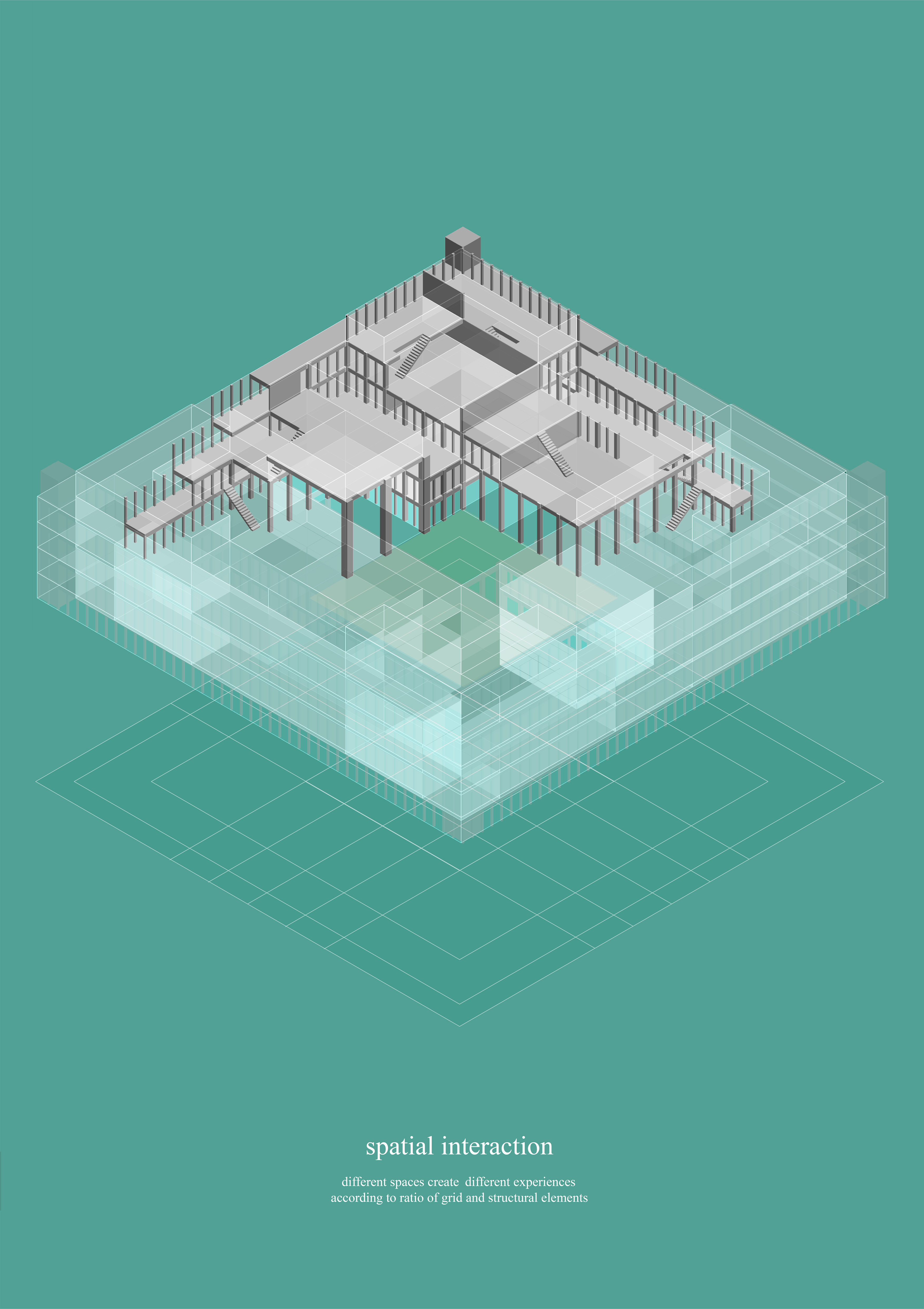